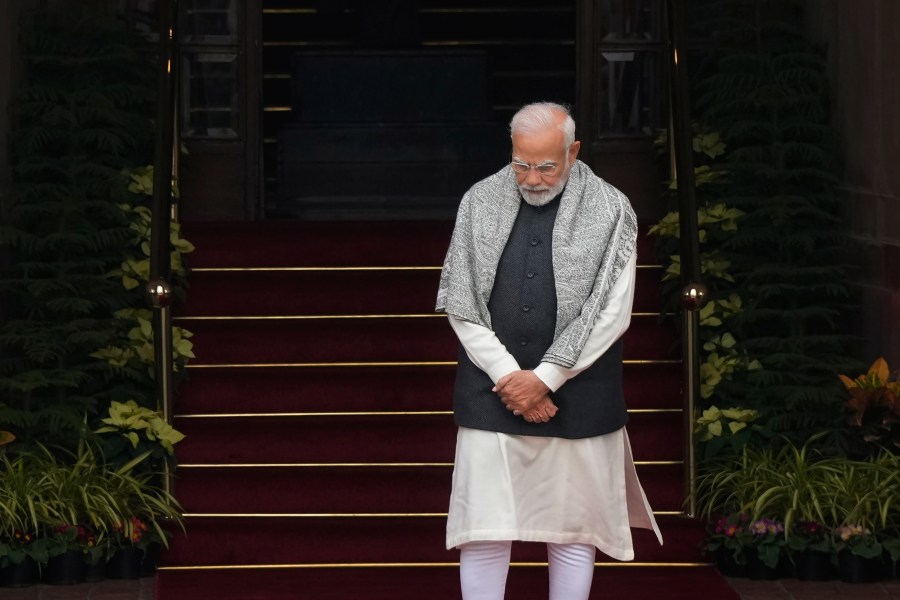 NEW DELHI (AP) – Days after India blocked a BBC documentary examining Prime Minister Narendra Modi’s role during the 2002 anti-Muslim riots and banned people from sharing it online, officials at colleges and Universities are scrambling to stop screening the film and ban the clip. about it on social media, a move that has been decried by critics as an attack on freedom of the press.

Tension rose in the capital New Delhi on Wednesday at Jamia Millia University, where a student group said it planned to screen a banned documentary, prompting dozens of police armed with tear gas and riot gear to gather outside campus gates.

Jawaharlal Nehru University in the capital cut off electricity and internet on its campus on Tuesday ahead of a scheduled screening of the documentary by the students’ union. Officials said this would disturb the peace on campus, but students nevertheless watched the documentary on their laptops and mobile phones after sharing it on messaging services such as Telegram and WhatsApp.

The documentary has created a storm in other Indian universities as well.

Authorities at the University of Hyderabad in India’s south have launched an investigation after a student group screened a banned documentary earlier this week. In the southern state of Kerala, activists of Modi’s Bharatiya Janata Party protested on Tuesday after some student groups affiliated with rival political parties defied a ban and screened the film.

The two-part documentary “India: The Modi Question” has not been broadcast in India by the BBC, but India’s federal government blocked it over the weekend and people are being blocked on social media, citing emergency powers under information technology laws. But banned from sharing the clip. Twitter and YouTube complied with the request and removed several links to the documentary.

The first part of the documentary, released by the BBC to UK viewers last week, revived the most controversial episode of Modi’s political career, when he was chief minister of western Gujarat state in 2002. It focuses on the bloody anti-Muslim riots in which more than 1,000 people were killed.

The riots have long troubled Modi as he is accused of allowing and even encouraging the bloodshed by officials under his watch. Modi has denied the allegations, and the Supreme Court has said it has found no evidence to prosecute him. Last year, the country’s top court dismissed a petition filed by a Muslim victim questioning Modi’s release.

The first part of the BBC documentary is based on interviews with victims of the riots, journalists and rights activists, who say Modi saw the riots differently. It cites, for the first time, a secret British diplomatic inquiry which concluded that Modi was “directly responsible” for the “climate of impunity”.

The documentary includes testimony from the then British Foreign Secretary Jack Straw, who says that the British inquiry found that the violence perpetrated by Hindu nationalists was aimed at “purging Muslims from Hindu areas” and had “all the hallmarks of ethnic cleansing”. were.

Suspecting that Modi tacitly supported the riots, the US, UK and EU denied him visas, a move that was later reversed.

India’s Ministry of External Affairs last week called the documentary “a propaganda piece specifically designed to push a discrediting narrative” that lacked objectivity and slammed it for “bias” and “a persistent colonial mindset”. . Kanchan Gupta, a senior advisor in the government’s Ministry of Information and Broadcasting, described it as “anti-India garbage”.

The BBC said in a statement that the documentary was “seriously researched” and included a wide range of views and opinions.

“We offered the Government of India a right of reply on the matters raised in the series – it declined to respond,” the statement said.

The second part of the documentary, released Tuesday in the UK, “examines the track record of Narendra Modi’s government after being re-elected in 2019,” according to the film’s description on the BBC’s website.

In recent years, India’s Muslim minority has faced violence from Hindu nationalists, encouraged by a prime minister who has been mostly silent on such attacks since he was first elected in 2014.

The ban has sparked a wave of criticism from opposition parties and rights groups, who describe it as an attack against press freedom. It also brought more attention to the documentary, sparking scores of social media users to share the clip on WhatsApp, Telegram and Twitter.

“You can ban, you can suppress the press, you can control institutions… but truth is truth. It has a nasty habit of coming out.’

Mahua Moitra, an MLA from the Trinamool Congress political party, tweeted a new link on Tuesday after tweeting a new link. “Good, bad, or ugly – we decide. The government doesn’t tell us what to look for.

Critics say press freedom in India has declined in recent years and the country was ranked 150 out of 180 countries in last year’s Press Freedom Index published by Reporters Without Borders. It accuses Modi’s government of silencing criticism on social media, particularly Twitter, a charge denied by senior leaders of the ruling party.

The Modi government has regularly pressured Twitter to block or ban content critical of the prime minister or his party. Last year, it threatened to arrest Twitter employees in the country for refusing to ban accounts run by critics after imposing sweeping new rules for technology and social media companies.

The ban on the BBC documentary comes after a government proposal empowered the Press Information Bureau and other “fact-checking” agencies to remove news deemed “fake or inaccurate” from digital platforms.

The Editors Guild of India urged the government to withdraw the proposal, saying such a change would tantamount to censorship.