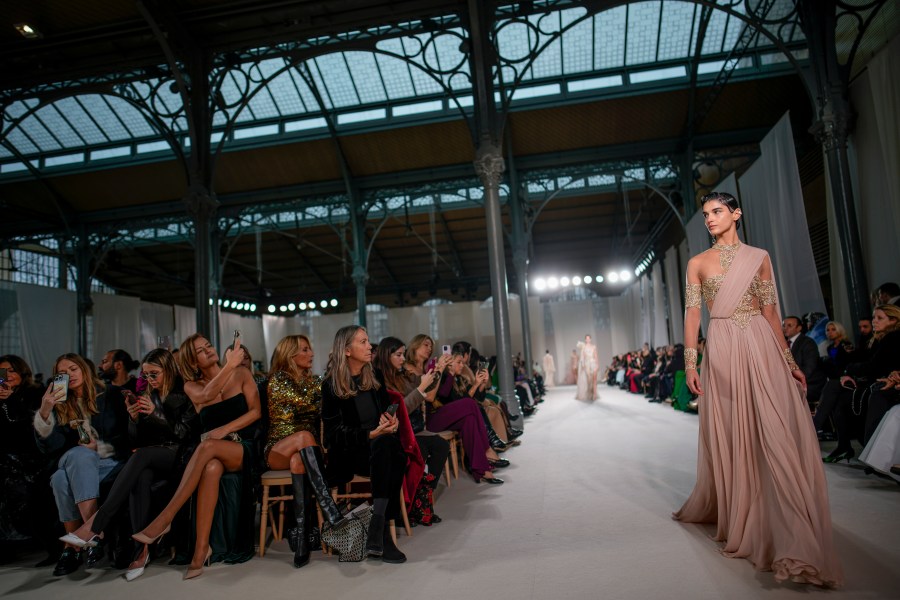 PARIS (AP) – Elie Saab took his guests to Thailand on Wednesday for a Paris Fashion Week couture show that dazzled with gold and intricate silk embroidery.

“Emily in Paris” star Paul Forman and socialite Olivia Palermo posed for the cameras amid wafts of perfume as transparent dresses floated around the runway at the Carreau du Temple in Le Marais.

Haute couture is an artistic tradition invented by the English designer Charles Frederick Worth in the 1870s. It involves intricate, time-consuming tailoring, the use of unusual fabrics and luxurious embellishments such as rare feathers and semi-precious stone beading – and it costs a lot.

Here are some of the highlights from Wednesday’s Spring-Summer 2023 show:

Elie Saab called it “an eclectic escape from the ordinary”.

Amidst the dull Parisian weather, blinding lights lit up long dragons inside, on asymmetrical bodices, or in waves on ivory peplums. Embroidered motifs of sacred koi fish seemed to float on mermaid tails and scalloped overskirts, while 3D guipure lace captured oriental blooms on gowns shimmering in gold.

This season, the Lebanese designer used the Thai kingdom as a springboard for a highly ornate, yet delicate, couture collection.

The show, titled “A Golden Dawn”, had regal ambitions and was executed with flair.

The most beautiful gowns were sometimes deceptively simple, where the luxurious material — like a blue satin sash draped asymmetrically over the shoulder — could speak for itself.

The age of email and growing environmental awareness haven’t left much of an impression on the fashion industry’s ancient system of invitations.

The top houses compete for the wackiest or most imaginative idea which often provides a clue to the theme of the runway collection.

Schiaparelli had a huge weighty golden brooch with a face in relief – ahead of a couture show that sparked controversy for featuring a fake lion’s head.

Then Valentino was like an invitation to a disco or concert, on a plain black card with the show description in the font preferred by club organizers. Show name? “Le Club Couture.”

After a visit to Kenya in October 2022, Yuima Nakazato was struck by what local people had to say about the waste and ecological destruction.

This season’s co-ed couture became a manifesto against a desolate African future. The Japanese designer staged a powerful underground show amidst smoke and blinding lights as if announcing the end of the world.

A loose black one-shoulder gown – over baggy pants – Asian style mixed with African styles, with an ornate belt clasp resembling the eye of a talisman.

Minimally adorned bone or thorn jewelry looks like a sloped-shoulder column ensemble. It was matched with Rick Owens-style black thigh-high wedding boots for a fashion-forward vibe.

Viktor and Rolf turn the couture on its head

The unique Dutch design duo staged a quirky and stunning show featuring gowns that tried to turn the couture on its head – literally.

The collection started out regular enough, aside from the punk-like colorful mini-beehive hairstyles. A shoulderless bodice gown fit for a bridesmaid shot in a voluminous yellow tulle full skirt. Later, a sculptural hourglass bodice descended into a segmented skirt that swept to the floor.

But then came the real fun.

Prompting half the audience to reach for their cameras, a model appeared wearing a full gown draped over her front over another look. The dress was held at a 2 o’clock angle, with the cloud-colored tulle full skirt extending dramatically to the left.

Another gown in yellow tulle then flared to a trompe l’oeil effect. The bustier’s two exaggerated breasts were less than an inch away from the model’s chin.

The most original of all was a violet gown with a plunging waist. It was oddly inventive – if a little gruesome – with a black hole visible around the midriff.