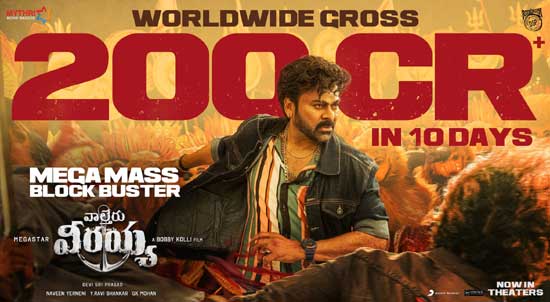 Chiranjeevi’s Waltair Veeraiyya has been doing wonders at the box office ever since it hit the screens worldwide. Director Bobby Kolli directed this big movie which stars Shruti Haasan as the lead actress.

The makers have officially announced that the film has earned over Rs. Worldwide 200 crores in just 10 days. It is an unprecedented comeback for the star actor.

The energetic actor Ravi Teja played an important role in this mega film which also stars Prakash Raj, Rajendra Prasad, Vennela Kishore and others in prominent roles. Devi Sri Prasad provided the soundtrack for this biggie.