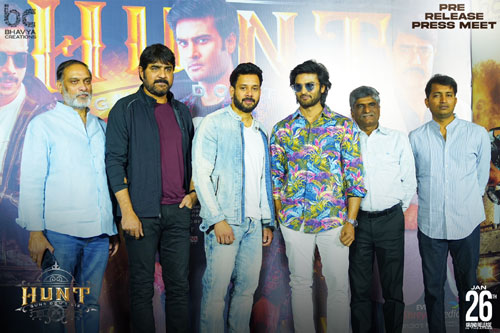 Telugu film Hunt, starring Nitro star Sudheer Babu in the lead role, is all set for a grand release in theaters on January 26, 2023. Earlier, the pre-release event of the action drama was held at AMB Cinema this morning. Hyderabad.

Hunt actor Sudheer Babu addressed the gathering on the occasion. He recalled his bond with late superstar Krishna Garu. Sudhir said that he used to get calls from Krishna Garu on the morning of every film’s release. “In his last days, he used to watch only Mahesh and my films,” the actor said. He further said that he dedicated his film journey to the late legend.

Speaking about the film, Sudheer Babu said that his character has two shades in the film and remarked that he has no reference to act as a memory loss cop. “Many people said that I did risky shots in the film, but the fact is that its producer Anand took more risks than any of us here. He spent a lot of money on stunts and filmmaking.”

The actor said that Hunt is a different film that no one has ever made in Tollywood and it is also guaranteed that the emotional scenes will work better than the action sequences. “I have a lot to learn from Srikanth garu and Bharath is a wonderful actor. Director Mahesh created a wonderful atmosphere on the sets,” said Sudheer. He thanked everyone who put their blood and sweat in making the hunt.