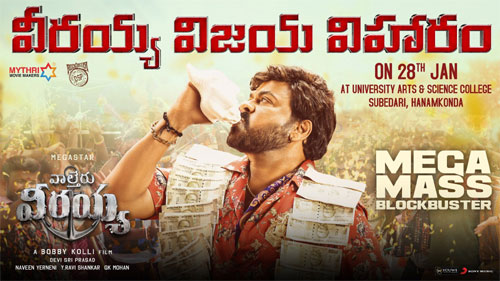 The makers have announced that the success ceremony will be held on January 28 at the University Arts and Science College, Hanamkonda. Chiru fans are extremely happy with the phenomenal success and are thanking director Bobby for delivering a big blockbuster.

Bobby in particular is being appreciated for bringing out the comedy angle in Chiru, which was missing in his recent films. Shruti Haasan played the leading lady. Prakash Raj, Bobby Simha, Catherine Tresa and Rajendra Prasad played other important roles. Mythri Movie Makers produced this action entertainer, which has music by Devi Sri Prasad.